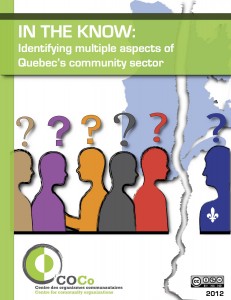 In 2009, COCo launched In the know: Identifying multiple facets of Quebec’s community sector, a three-year community-based action research project to document the diversity of English-speaking, bilingual and ethno-cultural community groups in Quebec and to better understand how they interact with wider structures, such as the Quebec government and its funding programs.

This study has now been completed and the final report is ready!

In the Know reveals that the groups who participated in the survey show certain patterns and characteristics: they tend to be small and hardy, many are longstanding, operate in a variety of languages, and respond to a diversity of needs and work in a variety of sectors. The groups are very active in networks, especially local and regional networks, but don’t participate as much in Quebec-wide affiliations. Many don’t receive global mission funding (a recurring source of core funding) from the Quebec government. This is especially true for ethno-cultural community groups. For a copy of the full report, click here. For a quick, plain language summary of findings, we’ve produced a Community Primer, which you can find here.

COCo undertook this investigation in order to provide a foundational portrait of English-speaking, bilingual and ethno-cultural community groups and to identify strategies to support the recognition and inclusion of these groups in the francophone community sector. This research project and its subsequent documentation are one of the few studies carried out in Quebec that specifically focus on these community groups and the work they do. It is also a great example of how community-based action research can be effectively carried out.

COCo would like to express much appreciation to the groups and individuals who participated in this study. We learned a lot from you! We would also like to thank SACAIS (Secretariat à l’Action Communautaire Autonome et aux Initiatives Sociales) for supporting this work financially and morally.

It is clear that English-speaking, bilingual and ethno-cultural community groups in Quebec make important contributions in the area of social development, social justice and the elimination of exclusion, the goal of Government of Quebec funding to the community sector. They need to be more fully understood and supported to reach their potential.

We would like your feedback on this study, its findings and analysis. We would like your input on the suggested implications for next steps. Do you see your group getting involved in any of them? Do the findings suggest other actions that your group would like to be part of developing? Let us know at info@coco-net.org, drop us a line on our facebook page or follow us on twitter – @COCoQC…