In the midst of the COVID-19 pandemic, COCo made a last-minute decision to hold an online AGM, instead of the in-person we had planned. Many of you have your Annual General Meetings in the coming months and will be facing similar questions, so we wanted to share what we have learned!

There are a few other guides on online AGMs, if you have more questions.

The Timing of Your AGM

Most community organizations have restrictions on when they can hold their Annual General Meeting, which you can learn more about in our legal information sheet (link). Some examples of this are:

The first step for your organization might be to clarify when your AGMs normally take place, and why. What kind of flexibility is available to you? For example, some funders have been waiving their requirements around AGMs (such as the Ministère de la Santé et des Services sociaux, whose communication on this issue is attached).

At COCo, we could have had at least an extra month for our AGM. However, our team decided that we would rather just get it done. We figured that once we’re back at work, we’ll have so many delayed projects that it will feel challenging to refocus on a delayed AGM. Additionally, we were conscious of the fact that as this pandemic continues, our own team might be more and more affected, and we might have less and less capacity to do an online AGM. So we pushed forward!

Legal Considerations for an Online AGM

We’ve heard a few organizations incorporated in Quebec say that AGMs simply can’t happen online. This isn’t quite true- but only as of recently.

Earlier this year, Quebec made changes to the Companies Act that make it easier to have video or phone meetings for your nonprofit Board or for your general assemblies (link). We wrote recently about alternatives to in-person meetings that still meet the legal requirements for nonprofit governance (link). Read both of those articles as you prepare an online AGM, especially if you are incorporated with the Quebec Companies Act!

In addition, here are some questions for your organization that might help you figure out some of the other legal issues of a virtual general meeting:

Setting up the Meeting for Your Online AGM

We used Zoom for our AGM. Some of us were already familiar with the tool and so it seemed like the flattest learning curve for the short time we had to set things up. However, there are lots of other tools out there you could look into.

Whatever you choose, schedule a run-through of your presentation a few days before your AGM to make sure everything works as planned. We discovered a lot of changes we needed to make in our run through- don’t skip this step!

We had already set up a google form for the in-person AGM we had planned, so we kept taking registrations through that same form. This had the advantage that it allowed our team to see who had registered without having to go into the Zoom meeting administration- and people who had already registered didn’t need to do so again.

As we didn’t use the Zoom registration, we had to find a different way to keep track of who’s in the room. A simple way to do this is to use a waiting room. You can set up a ‘waiting room’ for your meeting by checking that option in the meeting parameters when you schedule the meeting.

For people who arrived in our waiting room with their name displayed, we checked them off on our attendee list as we let them into the meeting. To the others, we sent a personal chat message asking for their name.

Because it was important for us to be able to quickly identify who is a member and who is not, the meeting host changed participants’ display names as they were in the waiting room. We added a prefix for members (M-) and for staff (S-). Board members also were identified by adding (Board) after their name. As a host, you can change people’s names by clicking the three little dots next to their names. You can also change your own name as a participant.

You could find your own solution to this – we often have lots of non-members at our AGMs, so it was important for us to have this be very clear.

We had people on mute by default, as we asked people to stay on mute unless they were speaking. The hosts also are capable of muting people if someone has forgotten to do this, so practice doing this ahead of time!

We had 1 host and 2 co-hosts. As a host, you can make other people co-hosts (link). This allowed us to have two people doing back end tech support and the MC to have more power to do things like screen share, which we restricted to only hosts.

In addition to having a minute taker as we usually would, we also made sure to

Voting Procedures in an Online AGM

These are the procedures we used, but you can see some other voting strategies ones in the guides we linked at the top.

Using the Chat to Vote

For when we needed someone to motion and second, we asked people to do it in the chat.

We ended up taking two other votes by chat also, to approve changes to our bylaws. People typed YES, NO, or ABSTAIN in the chat. We did this only because our polling feature wasn’t working (more on that later) and it worked well because it was easy to count – everyone said yes! We would not recommend if you think your voting might be more controversial- it would require a lot of irritating manual counting.

Using the Poll Feature to Vote

When we needed a vote, our plan was to use the polling feature on zoom. We had planned to use polls for our bylaw changes and Board elections – however, the poll broke on the day of, such that we couldn’t see who had voted in the polls, and we had to come up with a plan B on the fly. If you learn from our mistakes, though, you could make use of this feature!

To use the polling feature, you have to first turn on polling in your account settings and then set up polls in your meeting settings.

People moving to and from a virtual room is quicker than in the material world, but it doesn’t happen instantly, so plan time for that. We couldn’t try this at our AGM, so if you do this at yours, let us know how it went!

Because of the poll feature breaking on us, we ended up creating a google form for the board member election. It looks like this:

An email was sent to everyone who registered a few days before the AGM. The email had

We have attached examples of this communication if it is useful to you.

We also spent time at the beginning of the meeting making sure people knew how to:

Our online AGM was a team effort. Here are some of the roles we had assigned to people to make sure it went smoothly.

The usual best practices around PowerPoint presentations are especially important when it’s your only visual cue. The key things we learned along the way were:

Our PowerPoint presentation is attached if you want to take a look.

There were a couple of things we did to make our lives easier that might help you as well.

If you need more help getting your online AGM set up, feel free to contact us at info@coco-net.org, and we will do our best to help! 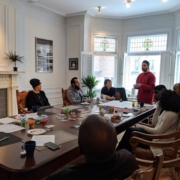 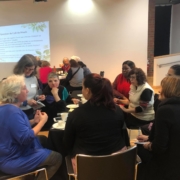 Looking for youth involvement on your Board? 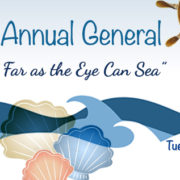 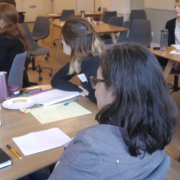 What Will it Mean for Media Organizations to Count like Charities? 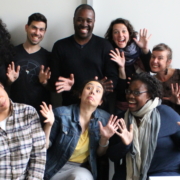 How to Join Our Virtual AGM

Basics of Contingency Planning for NonProfits
Scroll to top