Last Thursday marked COCo’s first interview for Quebec on the Move: An interactive exhibition of official minority-language social movements in Quebec, 1960-2010. The project, funded by Canadian Heritage, and initiated by Lorraine O’Donnell and Kit Malo, will gather a series of video narratives on Quebec social movements from the perspective of social leaders who participated in the movements from 1960 to 2010.

The Quebec on the Move! project emerged from a lack of information on the involvement in Quebec’s social movements of people from the province’s official language minority communities. In addition to collecting and spreading important information concerning the social movements of Quebec, Quebec on the Move! aspires to develop a sense of shared heritage among Quebec’s community builders & social changers as well as change the way Quebecers (of all linguistic backgrounds) understand past collective actions. It will also give a chance for viewers to re-think what it means to be engaged in their world(s) and build community through participant & partnership networking.

15 current community leaders will interview social leaders who they have chosen as inspirational to them and their work. Together, this set of conversations will weave a historical, cultural, and personal account of alternative social movements in Quebec, allowing us to create a timeline of important elements of Quebec’s history over the past 50 years. 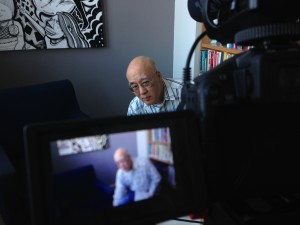 COCo was thrilled to welcome our first interviewee, activist and filmmaker William Ging Wee Dere (“Moving the Mountain (La Montagne d’Or)” and “Gens du Pays: The Chinese of Quebec”) into COCo’s offices for an interview by Parker Mah. As a third-generation Chinese-Canadian, one of the highlights of this interview was William’s recollection of the Chinese redress movement in Quebec. In this interview, we get to follow in William’s footsteps as he discovers the story of his family’s struggles as early immigrants to Canada which led to him becoming an active leader in this movement.

Here’s a short excerpt from our interview with William:

The video material emerging from Quebec on the Move! will travel as an exhibition to 3 cities in Québec inearly 2015: Sherbrooke, Quebec & Montreal. The exhibition will showcase a variety of social initiatives since the 1960s.  The interviews will also be featured on an online website, in full. Stay tuned for more information about this exciting project!

Just Talking: How can our communities work best together in times of auster...
Scroll to top